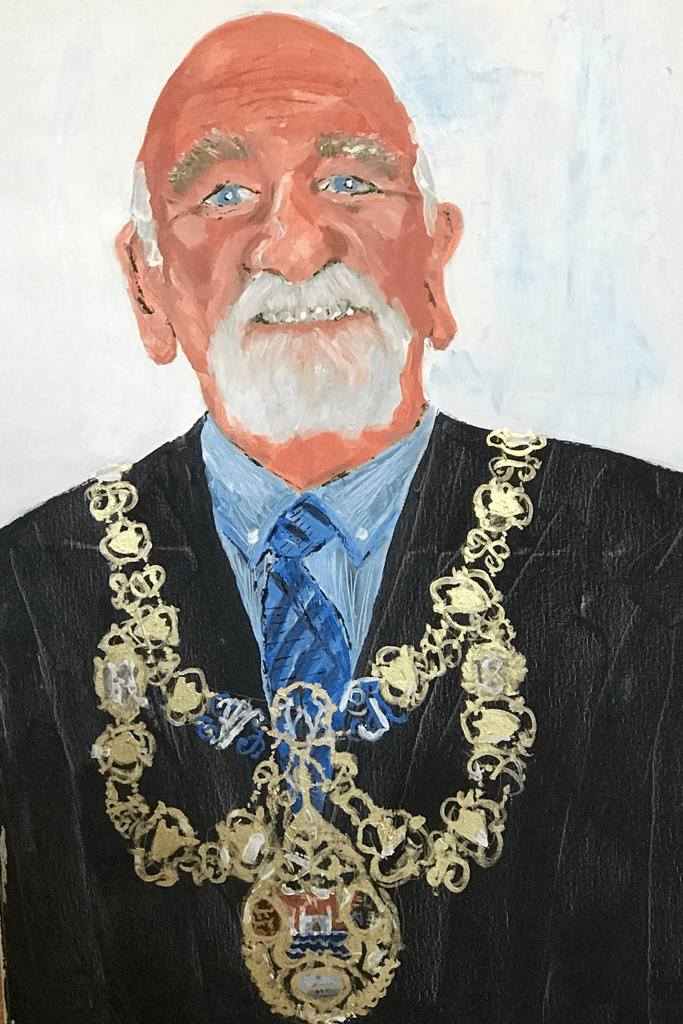 Just when things were starting to settle into a relatively calm ‘new normal’ wham bam the Covid-19 figures started to take a turn in the wrong direction and we are once again living in semi lockdown. We are now required to wear masks, the hospitality industry closes at 10.00pm and Mayoral events I am asked to attend are starting to slow down again or be cancelled.

The two week period prior to this was the busiest I have been, and I was able to attend and lend support to a wide range of wonderful causes.

My wife and I attended the Service of Remembrance at St. Johns Church, West Bay. The service was organised by the Royal Air Force Association, Bridport and Lyme Regis Registered Members Group. It was led by RAFA chaplain Rev Janice Moore and all other contributions were delivered by the projection of previously recorded pieces. My contribution can be viewed here:

Sadly as a result of the restrictions in place due to the Covid-19 virus the congregation was limited by invitation only. It was a very different experience but at the same time it was an extremely moving one. For example I learned that Wing Cdr Paul Farnes, passed away in January this year. He was among the 3,000 airmen – The Few – who defended Britain’s skies in 1940. His passing marks the final living link we have with those brave young Spitfire pilots who fought off the enemy in the skies of southern Britain. We will be forever in their debt and they will not be forgotten.

Being Mayor of Bridport is a serious business, but there are times when it is great fun as well. To carry out the formal opening of the newly constructed Tree House at St Mary’s CofE School was one of those great fun occasions.

The tree house was designed by Town Surveyor Daryl Chambers and constructed by his amazing outdoor works team. Nestling snugly between and beneath some large trees the treehouse already looks like it has always been there. When I spoke to Headteacher Kate Bartorska she told me that, “Everyone in the school is absolutely thrilled with the new addition to the school grounds.”

Once the formalities were over I joined the pupils in the tree house to explore it fully. The ramp with non slip treads provided easy access for an old man like me and the fireman’s pole once spotted was the obvious fun way back to ground level. Fortunately there was no-one there with a camera to record my inelegant slide down the pole. I am sure the pupils at St Mary’s CofE School are going to have many years of fun using this wonderful treehouse.

Sadly Bridport’s most historic event, the annual Charter Fair, was a very scaled back occasion this year due to the Covid-19 restrictions now in place. Bridport was granted its charter in 1253 and 765 years later a new Charter was signed to make Bridport the first Rights Respecting Town in the land.
One part of the celebrations that normally takes place on the day is the awarding of the Charter Fair Trophy.

This year the prestigious Charter Fair Trophy has been awarded to Bridport Community Hospital where the presentation took place. I had the pleasure of presenting the trophy to Matron Ellen Holmes, accompanied by David Powell of Bridport Rights Respecting, Town Crier John Collingwood, and Charter Fair Chairman Arthur Woodgate. My words, spoken at the ceremony, attempt to sum up the reason why they are so deserving of it.

“During these challenging times I cannot think of a more deserving recipient than Bridport Community Hospital, a place where people are able to access and receive the best of health care, a place where people matter. I myself have recently benefitted from the highly professional care provided by the dedicated staff. For that reason I am extremely pleased to be able to present this award on behalf of the people of Bridport as a small token of thanks for the wonderful work you continue to do.”

The Charter Fair is an event that celebrates not only the heritage of the Town, the vibrancy of the present through the involvement of so many diverse elements in our community, but also the Town’s future through the ongoing influence of the Rights Respecting Programme. The good news is that both Buckey Doo Square and the Arts Centre have been booked for the 2021 Charter Fair to be held on Saturday 25th September.

For more information about the Charter Fair contact: a.c.woodgate@btinternet.com

At 1.00pm on the last day of summer, a lovely sunny Sunday afternoon, the brainchild of Keith Hatch and Ruthy Ni Connallain became a reality. The Ropemakers pub and Bridport Town Council joined forces to host a mini music festival at Millennium Green, which raised around £2,000 for Bridport Community Fridge and Parkinson’s UK.

The event, Roped in for Bridport, was split over two stages with local acts and Ropemakers favourites bringing some much-needed live music to Bridport. Performers included Dylan Ross, Rosie Smith, Magdalene and the Mystical Birds, John D Revelator, Psychadelephant, Sinful Maggie, Samantics and headline act the Skimitty Hitchers. Herbie Treehead kept the crowd entertained between sets with amongst other things a fantasy auction and some very corny and topical jokes.

Daryl Chambers the Town Surveyor and his events team once again had the organisation and social distancing measures down to a tee. When I spoke to Daryl to congratulate him on the part his team had played in putting the event on he said “We have always said Bridport is an eventful town with a fantastic community spirit – and today proved it once again, even in times of adversity. It was good to work with The Ropemakers, the town council liaised with the relevant authorities in advance to ensure everything was run safely – but at the end of the day the audience behaved brilliantly and were just happy to be out in the sun enjoying themselves and listening to live music.”

Another lovely early autumn day and Bucky Doo Square paid host to a much scaled down Charter Fair in collaboration with Rights Respecting Bridport. This year the fair was limited to a musical extravaganza in support of the refurbishment and installation of new play equipment on Brandon’s Trail at Bridport Primary School. The trail was installed in 2009 in memory of Brandon Wayland who was diagnosed with cancer when he was just three-years-old. He sadly died two years later.

Town Crier John Collingwood opened proceedings with one of his wonderful cries and I said a few words later to thank those involved and encourage people to donate to a very worthy cause that will bring a great deal of pleasure to the children of Bridport Primary School for years to come.

The event was a great success with a range of outstanding local musicians and singers providing the Saturday shopping crowd with some wonderful entertainment as they paused for a few minutes to listen and tap their feet when passing through the square. Their appreciation was matched by their generosity and I saw numerous people stuffing notes and coins into the collection boxes. All in all great success and a credit to Arthur Woodgate and David Powell who pulled the whole thing together.

Loads of Amazing £5 Special offers from our independent shops and businesses.

Look out for Posters in shop, or on social media. Click on the link below for the offers booklet:

Help our Local Independent shops and business instead of Online or at the big supermarket as it means more money going into our local economy which means more jobs, better high street, a stronger economy and a nicer place to live.

Jazz In The Theatre at Bridport Arts Centre

23oct8:00 pmJazz In The Theatre at Bridport Arts CentreMusic & Theatre

Anita O’Day was an American jazz singer and self proclaimed ‘song stylist’, widely admired for her sense of rhythm and dynamics. Described in The Penguin Guide to Jazz Recordings as ‘the toughest, most dramatic and most fiercely swinging of all jazz singers’ she is probably best remembered for her performance at the 1958 Newport Jazz Festival in the States when she wore a spectacular black dress, white gloves and large hat, an event captured in the Jazz On a Summer’s Day documentary which made her an international superstar.

Vocalist Annika Skoogh has put together a fine band with some of the best musicians in the South West to authentically reproduce the music of Anita O’Day.  They focus mostly on songs from Anita’s collaboration with The Oscar Peterson Quartet ‘Anita Sings The Most’ but also O’Day classics such as Sweet Georgia Brown. The band features the UK’s best Oscar Peterson interpreter (and British Jazz Awards winner) Craig Milverton on piano, Steve Dow on guitar, Jim Rintoul on double bass and Gary Evans on drums.

Anita O’Day in film Jazz on a Summer’s Day https://youtu.be/WTOHZXFEO5c

Away (U) at Bridport Arts Centre - Relaxed Screening

Bridport Arts Centre “AWAY” (U Cert, 75 mins)  By Gints Zilbalodis AWAY is about a boy travelling across an island on a motorcycle, trying to escape a

AWAY is about a boy travelling across an island on a motorcycle, trying to escape a dark spirit and get back home. Along the way he makes a series of connections with diﬀerent animals and reﬂects on the possible ways he ended up on the island. Part dream, part reality, AWAY explores our common, universal need to ﬁnd a connection.

The multiple award-winning film took the prestigious Contrechamp Award at Annecy International Animation Film Festival 2019. Director and animator Gints Zilbalodis worked on the ﬁlm for three and a half years, writing the fascinating story, creating the beautifully animated landscapes and characters, and composing and recording the enchanting music to this stunning dialogue-free ﬁlm.

Do you call that progress, Mr Marples? The politics of railway closures in West Dorset, ca 1950-75 Thursday 29th October 7.30pm via Zoom An

The politics of railway closures in West Dorset, ca 1950-75